It occurs to me that these are historic days. The coronavirus has changed everything we do now. I’m working from home for the foreseeable future, with my son out of daycare. Mark continues to go to work because he’s an essential worker.

One month ago, on Feb 13 through the 18, I was in California for a convention. There was a vague awareness then that the new virus in the city Wuhan, China had shut things down, people were isolated to their homes, people were dying there; but it seemed far off.  If they were on lock down, that was a good thing, they could keep it from spreading. But containment failed, the virus spread anyway, spread around Asia and Europe, then here in the US.

In late Feb, my sister, her husband and their daughter traveled to Italy with my dad and his wife, for a family trip. While they were there, the virus spread around them, shutting down tourist sites and restaurants, by the time they left Italy on Feb 24th, Italy had 229 cases of the virus. Strangely, my dad told me that they didn’t have any difficulty coming back into the country, no screening of any kind from US Customs, not even a temperature check.

On Thursday 3/5 I saw a picture on Facebook of people flooding into a Costco store, and the shelves were bare, especially of toilet paper. The photo looked like it was taken in Asia, most of the shoppers looked Asian, and everyone in it was wearing a surgical face mask, and nobody in the US were wearing masks in public. It occurred to me that we probably needed some basic supplies, so I made a point that evening to go to Costco and buy toilet paper, and some extras of things we use ordinarily, wine, meat, butter, milk, cheese, etc, I spent about $300. I’m glad that I did go because the toilet paper supply in the store was down to just a few packages. Mark looked at what I’d brought home and made fun of me, asking ‘what do you think is going to happen? The black death?’ A week later, on 3/12, I saw on Facebook reports of people in my town waiting in line for an hour at Costco to check out and there was no toilet paper there.

I went grocery shopping at the Jewel on 3/15, and there was no toilet paper on the shelves there, they were all empty and they’d removed the shelves entirely. Who’s laughing now? 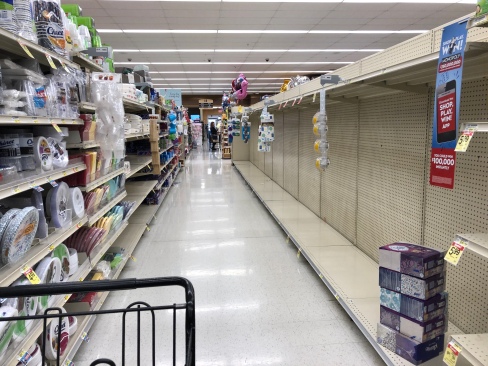 The outbreak looks vastly different today than it did just a couple of weeks ago. At the start of March, 70 cases had been reported in the United States, most of them tied to overseas travel. Since then, new cases have poured in by the hundreds and thousands, including more than 2,500 between the start of 3/17 and 3/18. The virus is now spreading in parts of the country where it had not been identified as recently as 10 days ago, including Louisiana, which now has at least 240 known cases. Illinois had its first death from the virus reported Tuesday 3/17.

I had told my boss on the morning of Friday 3/13 that I wanted to plan to work from home the following week, mostly because my 3 year son has asthma, and people with breathing issues have been known to suffer more complications than the average patient. By 4:30 that day, the Illinois Governor had required all public schools to close until March 30, so everyone else with kids was scrambling to work from home too. Over the weekend, they company announced they would open the office on Monday just so everyone could collect their belongings, they wanted everyone to work from home starting Tuesday 3/17.

I went to the grocery store tonight and so many shelves were bare. Bread was gone, canned soup, much of the pasta, and the entire aisle of toilet paper, paper towels and tissues was completely empty. The meat department had whole cases cleaned out. It was astounding. I walked around the store picking up what I thought we’d need in the next month, thinking what shelves people might be inclined to clear away next. I came home with $400 worth of diapers, cat food, tomato juice (my son loves it and all the other juices were gone), and what medicine was left of the shelves (a giant $18 bottle of generic Tylenol, since Ibuprofen will cause virus symptoms to worsen). The older man who usually runs the meat counter was sitting on the side of an empty display, saying how he’d never seen such a panic grip people as now.

I’m not sure what the future will bring. I’m trying not to be afraid, but it’s hard. I’m home alone all day with my son, with the prospect of weeks of the isolation ahead of us, doing all this work to keep him safe from this illness. I’m actually glad to have him with me though; having someone to entertain and keep busy keeps me busy, and focused on the bigger picture. If it was just me home alone, I think I’d be more vulnerable to despair. At least the weather is improving, and spring is approaching, and I can take him outside to play in the backyard for a while each day.

Things are getting worse, and I’m writing this all down because, as a historian, I know a first hand account, a primary source, is valuable; the view from inside the trenches. But also because in writing it out, I can make sense of it, document how things are changing and get a perspective of how its escalating. And when it might end.