We have reached 2 million confirmed cases today. By way of comparison, it took 73 days (since Jan 22) for us to reach 1 million cases, but it took only 11 days (since April 2) for us to reach 2 million cases.  I’ve been working at home, rarely leaving the house, for 30 days. Our current stay at home order is meant to end April 30, but the prevailing winds suggest it could go on another month, or longer. 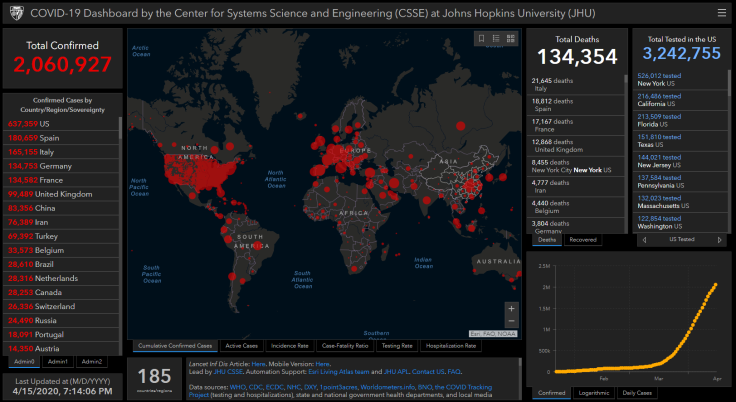 Of course, there are people who refuse to stay at home.  A Virginia pastor who defied warnings about the danger of religious gatherings during the pandemic and vowed to keep preaching  died over the weekend after contracting Covid-19[i]. Conservative protesters were carrying rifles near the Michigan State Capitol April 15, as they gathered to show their displeasure with Gov. Whitmer’s orders to keep people at home and businesses locked during the new coronavirus outbreak.[ii] I can understand their outrage over the disappearance of civil liberties, like the right to move and speak freely, but a mass gathering (with guns?) seems an ignorant way to communicate your disapproval during a pandemic.

‘Meanwhile, lawsuits already have been filed over whether abortion clinics or gun stores, for example, can be regarded as nonessential services. And detainees in immigration and pretrial detention who might be especially vulnerable to contagion have been challenging their confinement. Voters and their advocates in many states are trying to ensure that electoral systems are updated, for example, with greater mail-in options, to ensure ballots can be cast and counted in upcoming presidential primaries and the general election. And concerns are emerging about discrimination and rationing as hospitals become overwhelmed with the sick.’[iii]

Economic and racial inequalities mean that many people are suffering from this pandemic more than others. ‘The coronavirus is infecting and killing black people in the United States at disproportionately high rates, highlighting what public health researchers say are entrenched inequalities in resources, health and access to care. Black Americans disproportionately belong to part of the work force that does not have the luxury of working from home and they’re less likely to be insured, and more likely to have existing health conditions and face racial bias that prevents them from getting proper treatment.’[iv]

Unemployment has surged well beyond historic highs. ‘In the last four weeks, the number of unemployment claims has reached 22 million — roughly the net number of jobs created in a nine-and-a-half-year stretch that began after the last recession and ended with the pandemic’s arrival. The latest figure from the Labor Department, reflecting last week’s initial claims, underscores how the downdraft has spread to every corner of the economy. “There’s nowhere to hide,” said Diane Swonk, chief economist at Grant Thornton in Chicago. “This is the deepest, fastest, most broad-based recession we’ve ever seen.”[v]

As the lock down drags on, people are getting increasingly frustrated. Even if the shutdown is effective in slowing the virus, how long is it meant to go on? Whenever we open again, won’t the virus simply come rushing back? When would people be comfortable gathering again? If offices and schools reopen, would anyone choose to go? For myself, I’m not sure I would go back to the office every day with dozens of other people if I thought someone there might get me sick.

Are we meant to wait months, or a year, perhaps longer, for a vaccine to appear? ‘Perhaps not until there is a vaccine — and that would mean not just the vaccine’s development, but its widespread availability in a politically dysfunctional country that already has struggled mightily with the logistics of crucial medical supplies. Optimists are hoping for a vaccine as soon as September and also think that widespread antibody testing could be the key to making people feel safe to venture out again, assuming a large portion of the population is carrying such antibodies, which is very far from a certainty. Pessimists think that a vaccine is at least 18 months away. Extreme pessimists think a vaccine might never arrive in a fully satisfactory fashion.’[vi]

So what are we to do? How is this meant to end? Everyone is asking the same questions, and nobody has any answers. ‘Leaders are confronting two dilemmas: When will it be safe and ethical to re-open? And what systemic changes will be seen when that moment finally comes to pass? The twin demons of a terrible virus and economic ruin — and the relative pain each delivers and to whom — are emerging as an unfortunate political binary at a time when some semblance of unity would be preferable. But that is not the American reality at present.’ vi

Whenever we move forward, I think we need to prioritize the most vulnerable among us. We are lucky to still have two incomes, and many people are going hungry these days, so I donated $500 to the regional organization of food banks in my area. I’m hopeful that it can help to ease the burden of others, rather than just alleviate my own guilt of having such privilege and still feeling so powerless. I’m trying to look for the signs of hope in this slowly unfolding, unprecedented, unmitigated disaster.