Welcome to another episode on the worst reality television show ever, America’s Relentless Destruction. 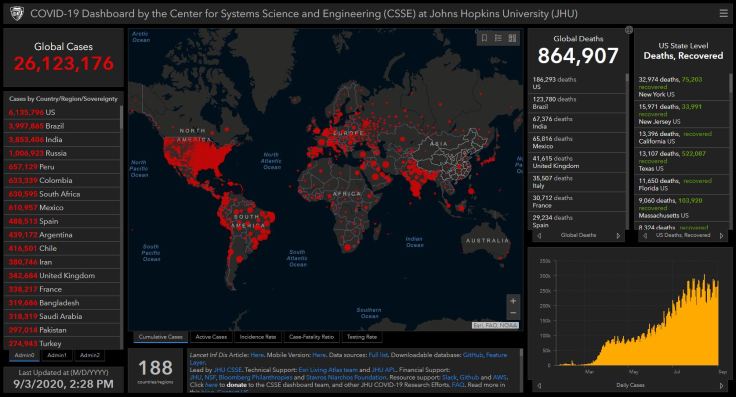 On “August 31, the United States passed a sobering milestone in the coronavirus pandemic. The reported number of cases topped 6 million. It took less than three weeks for the U.S. to add the last million cases to this tally. Deaths now top 180,000. Those figures are the highest for any country. There are about 25 million cases globally, so the U.S. accounts for about a quarter of all reported cases. And the U.S. only accounts for about 4% of the global population, so the coronavirus continues to be especially bad here.[i] And that’s just reported cases. The actual number is far higher. Some scientists suggest the true number of cases in the U.S. is more like 31 million given that many people never got tested or diagnosed. That’s highly uncertain, but it suggests it could have affected around 10% of the U.S. population.”

“Across the United States, at least 200,000 more people have died than usual since March, according to a New York Times analysis of estimates from the Centers for Disease Control and Prevention. This is about 60,000 higher than the number of deaths that have been directly linked to the coronavirus.[ii] As the pandemic has moved south and west from its epicenter in New York City, so have the unusual patterns in deaths from all causes. That suggests that the official death counts may be substantially underestimating the overall effects of the virus, as people die from the virus as well as by other causes linked to the pandemic.”

Then there is mass unemployment. “Just over one million Americans filed new claims for state jobless benefits last week, the latest sign that the economy is losing momentum just as federal aid to the unemployed has been pulled away. Weekly claims briefly dipped below the one million mark early in August, offering a glimmer of hope in an otherwise gloomy job market. But filings jumped to 1.1 million the next week, and stayed above one million last week, the Labor Department said. Today, close to 30 million Americans are receiving benefits under various state and federal programs. The rate of job losses remains high as government support for the unemployed is waning. A $600-a-week federal supplement to state unemployment benefits expired at the end of July, and efforts to replace it have stalled in Congress.”[iii]

Armed political skirmishes are erupting on the streets, and scholars are tracking a rise in violence[iv] and instability as the election draws near. Intense racial and partisan polarization have caused protests, counter protests and armed confrontations in several American cities, including Portland, Ore.; Seattle, Wa.; and Kenosha, Wis. In Kenosha, BLM protests occurred following the police shooting of a 29-year-old black man, Jacob Blake, who was shot in the back multiple times at point-blank range[v]”  by police in front of his children, even though he was not a suspect in any crime.  During the BLM protests, an armed 17-year-old Trump supporter from Illinois shot and killed two protesters and left a third person injured. Following that incident, Trump traveled to Kenosha, and defended the 17 year old (who has been charged with six criminal counts, including first-degree intentional homicide), offering another endorsement of violence against protesters, and providing evidence to renegade gun owners who feel that they can act with impunity in the name of law and order.”v It’s no wonder then, that gun sales keep shattering records[vi].

To make matters worse, “Trump has directed federal officials to find ways to cut funding to a string of cities controlled by Democrats, citing violence amid protests against systemic racism in policing, a move that threatens billions of dollars for many of the country’s largest urban hubs as the president makes the unrest a centerpiece of his re-election campaign. With polls showing him trailing his Democratic rival, former VP Joe Biden, Trump has tried to shift the public’s attention away from his administration’s failed response to the coronavirus pandemic and to what he depicts as out-of-control crime in cities. He has seized on an uptick in crime and has tried to blame it on local Democratic leaders. The president has repeatedly sought to paint cities as hellscapes that only he can save, regardless of how limited the violent outbreaks have been during broader protests against acts of brutality by police officers against Black people.[vii]

You might reasonably think that things could not get any worse. Haha, of course they can. Last week two hurricanes headed towards the Gulf Coast. Hurricanes Marco and Laura both formed at the same time, marking the “first time two hurricanes appear in the Gulf of Mexico simultaneously, according to records dating to at least 1900.”[viii]

“As it turned out, tropical storm Marco fizzled out, but Laura became the most powerful hurricane to reach Louisiana in 150 years.”ix  Laura made landfall Aug 27, near Cameron, Louisiana, as a Category 4 hurricane, packing winds of “about 150 mph, shredding houses and contributing to at least 17 deaths in Louisiana and Texas. The damage is so extensive that some infrastructure needs to be rebuilt from scratch, said Entergy, a power company that serves Louisiana and Texas. And that could mean weeks or months of powerless misery in the humid Louisiana heat. Hurricane Laura knocked out all seven electrical transmission line corridors feeding into the Lake Charles area, as well as most of the water service in Lake Charles. Trying to beat the stifling heat with no electricity, some residents have resorted to power generators. But at least eight people have died from carbon monoxide poisoning in Louisiana after using generators.”[ix] “Hitting perhaps the most important energy complex in America, Hurricane Laura is another warning of the growing threat of extreme weather, charged by climate change. The seven named storms that hit the US before September this year are a record, and hurricane season has yet to reach its peak.”[x]

Not to be outdone, “possibly the highest temperature recorded worldwide occurred in Death Valley on August 16, (an impressive 130°F[xi]). The heatwave has led to rolling power cuts that have affected about two million Californians. The state discovered it was short of reserve gas-fired power while neighboring states in the same boat had no surplus to export. When the sun set and solar generation stopped, the grid operator had to cut off customers to avoid a system collapse.”ix

And in what’s become an annual tradition of devastation, much of the west is on fire or covered with choking smoke. “Wildfires are burning from California to Minnesota, leaving millions of people to cough and wheeze through the toxic air. Plumes of smoke from record-breaking wildfires are blurring skies across California and the western United States this summer and robbing people of a respite they had embraced to endure the coronavirus — the simple pleasure of going outdoors. Sporadic power outages and the relentless heat have made life indoors almost equally intolerable. In the worst-affected corners of the West, some people now spend the days cloistered inside until their air-quality apps tell them it is safe to take a quick jog or bike ride. Others are sealing their doors and windows and hoarding air purifiers and heavy-duty filters for when they can use their air-conditioners. Pulmonologists and asthma specialists say they are swamped with calls from distressed patients.” [xii]

“The blazes burn not just forests, but also cars, paint, plastic and insulation, and gales of tiny particles belched out in the fires can travel hundreds of miles and end up down someone’s throat, slipping through most face masks like water through a colander. The particles can irritate sinuses, eyes and throats and inflame the lung sacs that bring oxygen to the blood.” xii

With the Hurricane Laura hitting Louisiana and Texas as an extremely dangerous Category 4 storm and wildfires menacing the western U.S., millions of Americans are facing the complex risks of a natural disaster striking in the middle of a pandemic. “New research by scientists from Columbia University and the Union of Concerned Scientists found that fierce storms ranked as Category 3 or higher could result in thousands of new COVID-19 infections. The scientists modeled an infection scenario by retracing the evacuation routes of the 2.3 million southeastern Floridians who fled Hurricane Irma in 2017. That same number of evacuees on the move today could prompt as many as 61,000 new cases of COVID-19, the study found. The caseload mounts when people are evacuated to areas with high infection rates. Additional studies have warned that hurricanes and other natural disasters that hit areas already struggling with COVID-19 will heighten risk and make recovery harder.[xiii]

That’s as much national news as I can’t regurgitate right now.  As for me, I find myself four months pregnant, still working from home, thankful to have a job and be able to work from home. The unrest and plague and disasters elsewhere feel unreal, like several disaster movies playing all at once in another room, avoidable but difficult to ignore.  Friends have lost jobs, so things feel precarious, but everyone I know is still healthy. That’s likely to be a temporary comfort though, as schools and universities around the country start to a new school year this week.

A lot of people pin their hopes on the November election changing things, but I’m afraid things will only get worse. If Trump loses the election, I doubt he’ll just disappear quietly into obscurity. What if he declares the election a fraud, and refuses to step aside? What if the GOP disenfranchise enough people[xiv], or succeed in shutting down the Post Office to obstruct mail in voting[xv], or people are afraid to vote because of the pandemic, and Trump wins re-election? Will there be a civil war? Even if I had a crystal ball, I doubt knowing the future would give me any comfort.

Best of luck to you all, I hope I see you in another month.

[ix] Some Louisiana residents won’t have power for weeks, if not months, after Hurricane Laura. Holly Yan. August 31, 2020. https://www.cnn.com/2020/08/31/us/louisiana-hurricane-laura-damage/index.html

[xiii] ‘Everything has changed’: How hurricane preparations are adapting to a deadly pandemic.  Sarah Gibbens. August 26, 2020. Https://Www.Nationalgeographic.Com/Science/2020/08/How-Hurricane-Evacuations-Shelters-Change-With-Coronavirus/