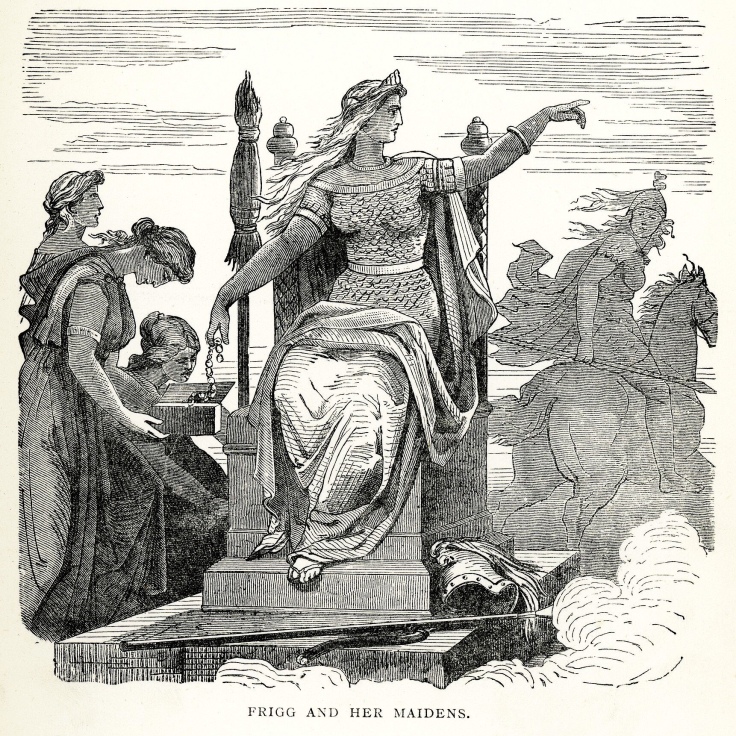 Norse Goddess Frigg and her Maidens. From ‘Asgard and the Gods; the tales and traditions of our Northern ancestors, forming a complete manual of Norse mythology’, by Wilhelm Wägner, 1800-1886.
Frigg (old Norse “beloved one”) is the queen of Asgard and wife to Odin the all-father. Frigg is a sorcerer and associated with love, marriage, fertility, and motherhood, she also has the power of prophecy and yet she never reveals what she knows about the future. The English weekday name Friday (ultimately meaning ‘Frigg’s Day’) bears her name. After Christianization, the mention of Frigg continued to occur in Scandinavian folklore.

“Strangely for a goddess of her high position, the surviving primary sources on Norse mythology give only sparse and casual accounts of anything related to her personality, deeds, or other attributes. The specifics they do discuss, however, are not unique to Frigg, but are instead shared by both her and Freya, a goddess who belongs to both the Aesir and the Vanir tribes of deities. From these similarities, combined with the two goddesses’ mutual evolution from the earlier Germanic goddess Frija, we can see that Frigg and Freya were only nominally distinct figures by the late Viking Age, when our sources were recorded, and that these two figures, who had formerly been the same deity, were still practically the same personage in everything but name.” Source